The library founder’s map collection comprises not only many so-called hungarica maps and atlases but is also abounding, due to Count’s cosmographical collecting scheme, in a large number of valuable maps of European cartography produced in the 16th-18th centuries. Nautical charts stored as single sheets or bound in atlas volumes with an amount of some 300 sheets can be taken as an important collection part of high value which involves many precious charts of the 17th-18th centuries.

Compiling this exhibition part, we were intent on presenting specialties and diversity of this particular cartographic genre in the founder’s collection both in point of regions represented and in point of production-publication aspect. The charts on display aptly demonstate the dominant rate of charts of  Dutch map making and publishing firms as preponderance of the works produced in the 18th century. Besides, we were also straining after exhibiting works of other -- Danish, English, French, Spanish --- nations of this collection part. Among charts shown, works depicting European seas and representing majority of the genre in the collection, works delineating oceans, waters and seacoasts of America, Africa and Asia can also be found.

The origin of nautical charts goes back to the Middle Ages. Their production might mostly been triggered by practical demands. From the outset, they were used as navigational aids. Pilots and capitains of sea vessels could sail offshore because of the use of compasses and charts. Using them, they were able to determine their position on sea and to draft and, successively, correct tracks of their ships.

Bearing a relation to practical purposes, content and formal characters of the charts are quite special. Their most salient feature is a rhumb-line system which functions as a reference in determining tracks of the ships. Lines crossing each other were constructed along a large, mostly invisible circle, cutting it at points of directions (at compass points). Other elements of the charts were made also for the needs of sailors: seacoasts, islands, river mouths, harbours and hazardous elements of seas for navigation as shoals, rocks and reefs. Besides, as increasingly general element of the charts in the 17th and 18th centuries, data of soundings appeared.

In the formative years of the genre, from 13th to 15th centuries, charts were mostly produced in harbours of the Mediterranean Sea, for example, in Genoa, Venice, Mallorca, Barcelona, in frames of traditional guild system by members of  families and those generally being in close kinship. The cover area of charts in this early period was basically coindiced with regions of the Mediterranean basin, the Eagean and Black Seas, and afterwards these regions were widened with the western Atlantic shores of Europe. From the mid-15th century, as an outcome of the Portuguese explorations of the century, the western, equatorial and southwestern waters and coasts of Africa were also represented.

In the period of great geographical discoveries, actuated by voyages of Christopher Columbus (1451-1506), the European seafaring nations, pre-eminently the Portuguese and the Spanish, were circuiting and roaming world oceans and seas in a few decades and following mostly their trade interests, coasts of these far-off oceans were taken in possession as well.  As a result of these activities, waters of distant oceans and seas were increasingly delineated on European nautical or portolan charts too.

Although in Western Europe shipping activities have had traditions of centuries, chart making commenced only in the 16th century. At the outset, manuscript charts were produced -- as in their model Mediterranean centers --, in local French, English and Dutch workshops. As a new phase of the chart-making history of Europe, printed charts and printed pilot guides were created in and from the late 16th century. In this field, the Dutch cartography had guiding or even decisive role. Owing to the high standards of printing industry, to a multitude of qualified map makers and engravers and also to a great number of experienced sailors, the Dutch chart publishing firms shortly achieved a leading position on the markets of Western and Northern Europe.

However, traditional navigational methods, written navigational guidances and hand-made charts have remained, besides personal sailing experiences and knowledge, in general use, among seamen sailing mostly inshore waters, still in the mid-18th century. At the same time, demands of increasing traffic on the oceans were growingly supplied with printed charts and pilot guides mainly by Amsterdam-based companies. Products of these Dutch workshops, printed navigational guides, charts and sea atlases, did not have real competitors in the 17th century. Correlating only with the development of institutional frames of civilian states in other European countries, each state in Europe could gradually establish or consilidate its own chart-making and publishing industry. 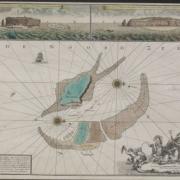 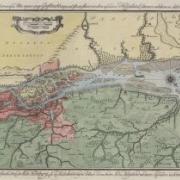 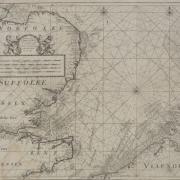 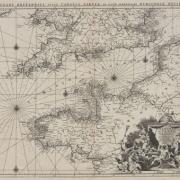 Nautical chart of the English Channel or La Manche (after 1721) 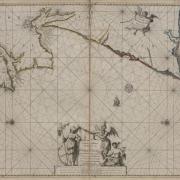 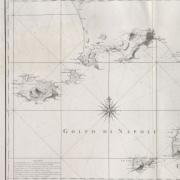 Nautical atlas of the Kingdom of Naples (1785) 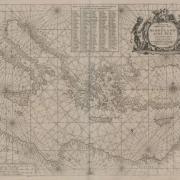 Nautical chart of the Mediterranean Sea (1690) 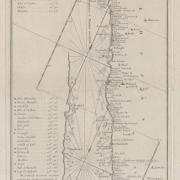 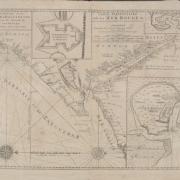 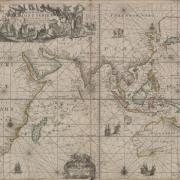 Nautical chart of the Indian Ocean and the western part of the Pacific Ocean (ca. 1710) 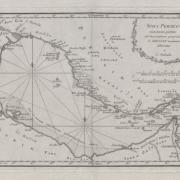 Nautical chart of the Persian Gulf (1774) 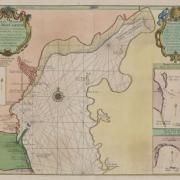 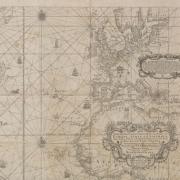 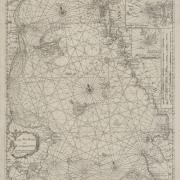 Nautical chart of the Kattegat (1776) 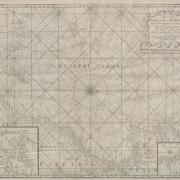 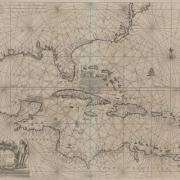 Nautical chart of the Caribbean Islands (1682) 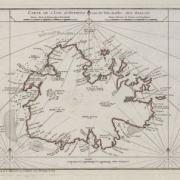 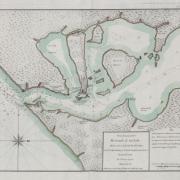 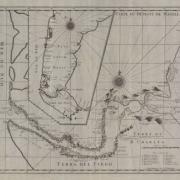